The re-emergence of black-backed and golden jackals

On the 20th of October, Marine was invited to talk about the Eurasian lynx at the 40th French Mammalogical Conference in the town of Caen (western France). It was also the opportunity for her to give another presentation, this time about some of her PhD work on jackals. And because the conference was in Europe, she also spoke about golden jackals.

She drew a parallel between the re-emergence of black-backed jackals in the Karoo (more about that in a future post) and the expansion of golden jackals across Europe. She started by showing the incredible ecological flexibility of both species. She then demonstrated that anthropogenic factors were the reasons for the fall in jackal numbers in both areas (mostly due to hunting and poisoning campaigns) and that the reasons for the re-emergence and expansion of both species were probably to be found in the synergy of different factors, from the probable diminution/extirpation of large carnivores, notably grey wolves for golden jackals, and lions and leopards for black-backed jackals (i.e. mesopredator release), to the change in land use in each area, the ending of large-scale legal poisoning campaigns and bounty hunting, and the change in the legal status of the two species, as well as a more positive public opinion towards the canids.

The presentation was also a good opportunity to discuss with the audience about the first golden jackal presence records in France (2017) and the likelihood for the species to permanently settle in. 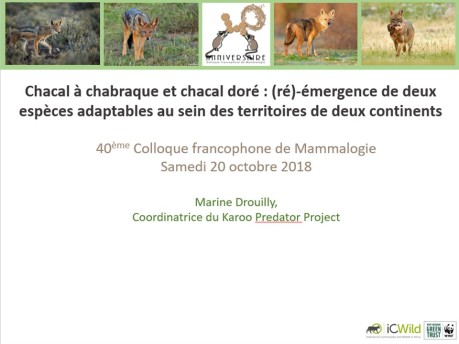